To agree or not to agree, that is the (subject–verb) question

Subject–verb agreement falls into the category of things I wish I’d been taught at school. If you were at secondary school in the late 1960s and early 1970s, you probably weren’t taught grammar. English lessons were about ‘comprehension’ and ‘creative writing’. The only grammar we knew of was from French lessons, where we learned basics such as the subject is the thing doing and the object the thing being done to. Through l’accord sujet/verbe we gleaned that whether the verb is in the singular or plural form depends on whether the subject of the verb is singular or plural. 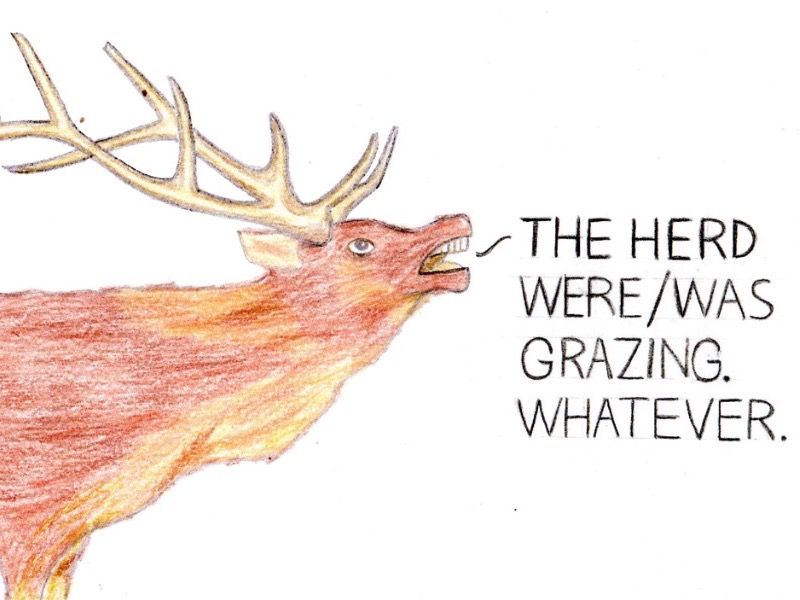 Spotting a subject–verb disagreement isn’t easy when another phrase with a plural noun occurs between the subject and its corresponding verb. Sometimes it’s tricky deciding what the subject actually is in a long convoluted sentence in the middle of an unending dry paragraph in the 60-page corporate governance section of an annual report. Though, if by the time you get to the verb, you can’t remember what the subject is, the only agreement to be reached might be that the sentence needs editing.

Eric Partridge’s Usage and Abusage says the main thing is to be consistent and don’t write things like:

The family is well and send their regards.

Another trap is the composite subject. Fowler’s Modern English Usage gives us this example:

Tarring and feathering was too good for Meakin.

One thing that can help is what Steven Pinker calls the logic of trees, a helpful way to break a sentence down, as described in his book The Sense of Style. Even with the help of tree logic, it’s sometimes not clear whether the subject itself is singular or plural; for example, when collective nouns are involved. It all depends on the context, and for me, this is where it gets tricky. Here’s an example from a recent project, a series of children’s books we at Accuracy Matters are working on:

A herd of reindeer were grazing.

The shoal was moving north (as a unit, so singular)

The shoal were darting in all directions (as individuals, so plural)

Pondering the advice in the grammar guides is fun, but to me these books don’t fully explain how to deal with borderline cases. So, maybe a herd of reindeer were grazing is OK then, if the context is one of individual reindeer eating grass. I suppose you would say a herd of reindeer was migrating? I’m still not sure.