I don’t know about anyone else, but rainy childhood afternoons often found me gazing at OS (Ordnance Survey) maps. I would giddily trace paths across dramatically close-bunched contour lines depicting hills and gorges, or along meandering lines drawn far apart to show wide, gentle valleys. Little did I know at the time that the landscape I was imagining could easily have been purely fictional. 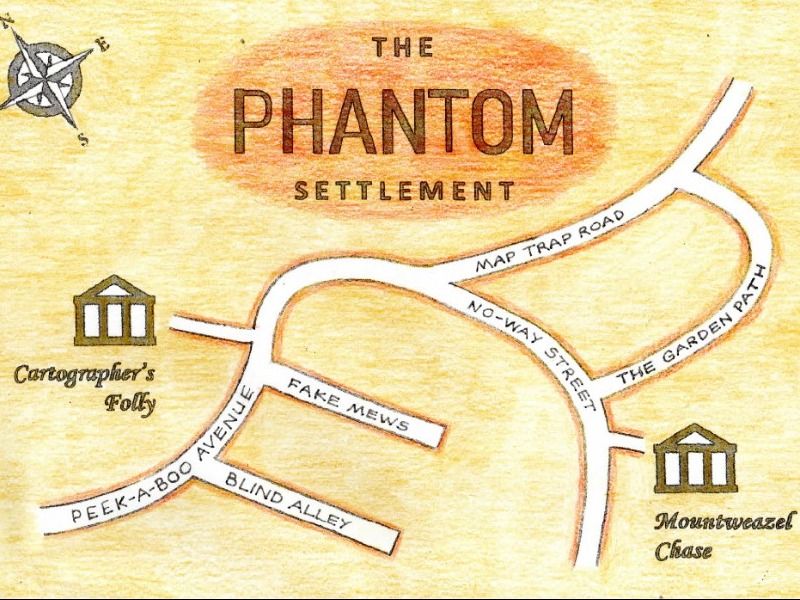 After talking to a number of fellow cartophiles online, I recently discovered that some roads and places on maps aren’t real, and have been inserted deliberately. It seems that map publishers have always included fictitious streets to discourage and prove copyright infringement. In 2005, the Geographers’ A-Z Map Company claimed there are “about 100” trap streets in the London A-Z Street atlas.

I was stopped in my tracks. Then my imagination swung into action: if it’s on a map, surely it must be real? So where are these places; who lives there? Are they portals to parallel universes? Perhaps they are, for I’ve since discovered several stories featuring trap streets or phantom settlements.

In the Doctor Who episode ‘Face the Raven’, alien refugees hide in a London alley invisible to passers-by. Anyone noticing it on a map assumes it’s a trap street. The Doctor saves the refugees by searching for trap streets on a street map.

One phantom settlement even became real. Agloe was a fictional trap hamlet marked at a road junction on a map of New York State. In the 1950s, a shop was built there, named Agloe General Store because ‘Agloe’ is the word the builders saw marked on the map.

Unfortunately copyright infringement prosecutions rarely succeed. Even if a map is eligible for copyright, courts usually decide that fictitious entries aren’t. Prosecutions are more successful when the map maker changes the depiction of an existing street instead. In 2001, the Automobile Association settled out of court for £20 million after copying OS maps. No fictitious entries were involved; the Ordnance Survey protected its copyright by using specific style features such as varying road widths.

Not using trap streets also avoids the risk of interfering with road users’ navigation and sending them down non-existent roads (and/or into other dimensions), which is helpful.

Fictitious entries also occur in reference books, in particular dictionaries, which often contain fake entries either as humorous hoaxes or to deter plagiarism.

These fake entries are often called ‘mountweazels’ after Lillian Virginia Mountweazel, herself a fake entry in the 1975 edition of the New Columbia Encyclopedia.

The entry stated that she was born in 1942, photographed unusual subjects such as New York City buses, Paris cemeteries and rural American mailboxes, and died aged 31 in an explosion while on assignment for Combustibles magazine. She even has a Facebook page.

Sadly, much as with maps, legal action rarely succeeds. For instance, The Trivia Encyclopedia deliberately included false information about TV detective Columbo and then unsuccessfully sued Trivial Pursuit, who had copied it.

* ‘How to take care of your eyesight’

*  ‘The cursed comma splice: how to avoid making this common punctuation error’.